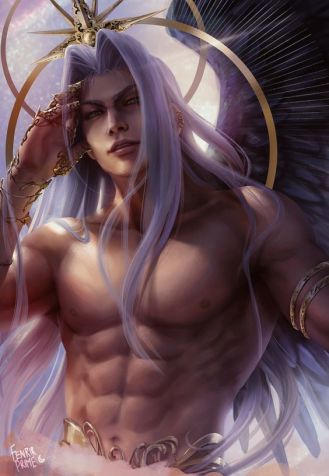 About this picture…I will now quote from the famed philosopher: the internet.

When VR become indistinguishable from reality, fantasies will be OFF THE CHAIN.

Do with that what you will.  Oh, and I definitely want one of those hand thingies my dear Seph is wearing on his right   Apparently, Alexa has been listening because I keep getting advertisements and Pinterest recs for them now.  Also, I’m aware his wing is on the wrong side.  Are you going to tell him?  I thought not…

I’ve been trying to update…again, which has of course delayed my posting, and I’ve been getting comments asking about when I’m going to post.  This is ridiculously flattering, and I feel like quite the narcissist just by being flattered.  I hope to get the updates to the chapter done soon, so I can edit and post.

I’ve been quite preoccupied with catching up on Downton Abbey.  I’d watched the first three seasons years ago, but only recently recalled the rest of it was “free” streaming on Amazon Prime.  It’s drawn me right back in, and I’ve fallen down the well.  In re-watching it, I realize how much of, er, that kind of pageantry has seeped into my writing.  I always envisioned the two of them having “fancy” voices despite my better efforts to stem that, but to my uncultured American ears, even the way they speak has that kind of cadence (omg PLEASE DON’T HATE ME ENGLISH FRIENDS D:)  I know we over on this side of the pond tend to romanticize things and paint a fairer sheen, but it’s such a darling, if guilty, pleasure, and I hope you won’t rob me of that :p

“You’ve never hurt me, Great General.”  His joy broke like a shattered wing.  The feathers so sharpened slashing his soul as he laid his brow to hers.  “Never, never…” Aeris continued unknowingly causing him pain.  He kept his eyes closed for fear the truth would shimmer so slim in the light.  He had his grace so needed no sight to carry her to the dining room.  Another guilt ruled him for it was quite late for the flower maid to take dinner, but Aeris didn’t mind nor was she starving as she had been six months ago…

I decided I needed a better voice for the torturer in Chapter 1, so I asked my friend, aptly nicknamed Nightmare, to facilitate.  I don’t know when he’ll be able to do it, but it hardly matters since I still have recordings to do myself.  At this point it’s really just having a quiet space to do it.

I broke the 1000 word mark the other night with this, and the meat of the action hasn’t even started yet.  It’s…coming I suppose?  I don’t think it’s lack of interest and it could just be that I had an off night.  I need to go back to what I just wrote and add in notes that I wanted to include.  I find it flows better when I’m talking about the relationship (which some of you know from my tumblr exploits).  I’ll be more transparent as I write more…maybe.

Well…THAT was interesting.  I just took a break from writing this to take down some delectable notes.  I’m a mess lol.

I decided not to go with Camp Fire.  It wasn’t doing anything else for me and if I’m going to spend $50 on something, I want it to be worth it.  I’m still gathering my notes for this.  I certainly think about it quite a lot.  I will say watching a period British drama about the upper class has really helped put me into the mindset of how I want this story to go.  It’s not an exact parallel, definitely not in social mobility, but the pageantry, aesthetic, and grandeur is similar.  I found quite a lot of similarity between Maya in my story and Anna in Downton.  Tragic ;_;

I need to go back to bingeing on Downton Abby, but maybe I’ll find some time to write more of my Zelda fanfic.  It’s odd how nearly every story I’m working on could be helped by that show’s aesthetic, though I wonder what it says about me.  I do love writing about regal pageantry and the gentry.  I hope you’ll all vouch for me when they send me to the guillotine :p

What’s a show you can binge watch for days?