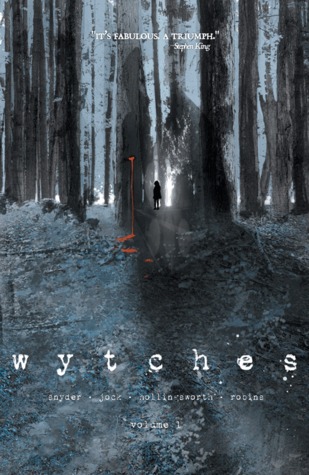 Despite the fact her father Charlie says this is “her story,” it was largely more focused on him.  The flashbacks centered on Charlie, and the voice-overs were Charlie’s, so if this was Sailor’s story, she didn’t get much say in it.  While her father eventually became less of a douche about his daughter’s anxiety, he sure as hell didn’t help it along by forcing her to climb a derelict Ferris wheel at one point with only him berating her spurring Sailor on.  This could’ve been how the author showed Charlie’s character development, and this could just be my hangup due to my own past, as it was hard for me to read, but it still seemed pretty shitty.

I was disappointed in the “wytches” themselves and hoping for a bit more originality and complexity with the idea, but they were extremely one dimensional.  Sailor’s anxiety and paranoia is certainly validated, but huge swaths of the big reveal felt a bit trite.

I wasn’t going to continue the series until I realized this was the entire story lol.