So I came to the decision that I’m going to use whatever music I fucking want for one version and then go the safe route with another.  I have no clue why I’m like this; I’m just like this.  There’s music I had in my head for certain parts, and I just want to hear it there.  I’m wary about posting such anywhere because I can’t afford to get sued, and I have no idea what fair use entails (need to research that), but example, there’s a part in this first chapter where I was hearing “Empty Chairs at Empty Tables” from Les Miserable, but I wanted an instrumental/piano version.  I found one and would love to use it, though I’m considering learning to play it myself.  I looked up the music and it’s not too complicated (way easier than Aerith’s Theme I taught myself), so that’s an option.  Granted, this isn’t quite what I’m talking about.  It’s more stuff you’d generally have to pay royalties for, but then again you hear that kind of music in AMVs all the time, and I used it in my slideshows.  Just more proof that everything is arbitrary.

I haven’t left my apartment since Monday the 8th.  My company started a working from home test that was supposed to only last until this upcoming Wednesday, buuuut I’m pretty sure I’m not going back to the office any time soon.  My husband was laid off last Monday since he does accounting for a school bus company.  Yeaaaaaah, that’s not going to be necessary for a bit.  He’s been looking for a new job and has had a few video interviews, but I’m not overly optimistic.  Hell, I don’t even know if he’s going to get anything for unemployment by the end of the week. I have a contingency plan that’ll last through April, but after that *shrug*  I’m definitely not paying my student loan and saving a ton on gas by not going anywhere, but I’m really hoping I don’t lose my job since I’ll die without health insurance *double shrug*  Eh, what can you do?  As long as I have some Xanax and wine I’ll be okay.  My BFF also had her hours cut since she does graphic design for a gaming/entertainment company, so she’s of course worried.  We were both planning on buying houses this year LOLOL.  All I can do is laugh.  It’s almost like unchecked hustle culture where people are expendable in the pursuit of the almighty dollar doesn’t work; we’re much more connected than the whole “rugged individualism” that permeates my country’s zeitgeist, and taking care of people should take precedence.  “You can’t build a world on the backs of the bruised and expect it to stand firm.”  I’m being SUPER narcissistic right now in quoting myself, but why the hell not?

I hope all of you who have no choice but to be publicly exposed are…I don’t even know what to say.  Keeping safe?  Like if your jobs are forcing you to do it, fuck them, but if your position is vital, I hope you have all the protections.  I won’t even leave my house for a doctor’s appointment.  Your girl is a fat asthmatic with a bad back who’d probably die if she got it, but TSN has been practicing social distancing before it was cool, so as long as I can work from home and my hubs doesn’t bring it back with him from outside, I’m sure I’ll be fine. 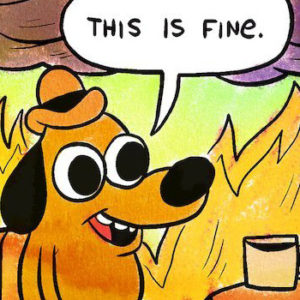 And finally, because I’m a nice person,

If we have nothing else, we at least have memes, and humans have never taken anything completely seriously.