Set in an alternate world of art deco beauty and steampunk horror, Montress tells the epic story of Maika Halfwolf, a teenage survivor of a cataclysmic war between humans and their hated enemies, the Arcanics. In the face of oppression and terrible danger, Maika is both hunter and hunted, searching for answers about her mysterious past as those who seek to use her remain just one step behind…and all the while, the monster within begins to awaken.

This series is as beautifully brutal as it is convoluted.  It combines Lovecraft mythos with Egyptian mythology and Irish folklore (The Fair Folk) among other things to weave a world of magic and savagery.  Where “there’s more hunger in this world than love” is exemplified by starving slaves eating the contents of a dead boy’s stomach.

Maika Halfwolf has a monster living inside her, and her quest for the truth leads to her enigmatic mother and beyond, while she hides from those who would use her in a land full of political intrigue and betrayal. 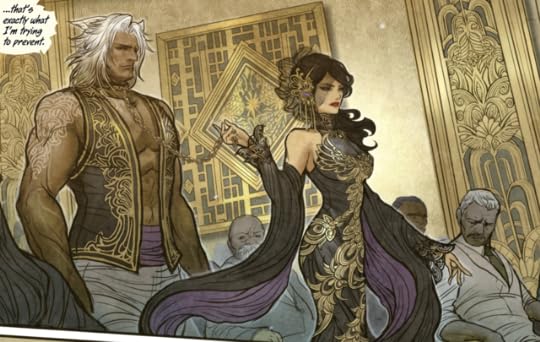 and I love the representation.  The vast majority of the characters are people of color, and the main character is disabled.  I’m also a huge cat lover, and cats have such an important presence in this work.   It also has so many story beats that appeal: Lovecraftian old gods/ancient horrors, Ancients mixing their blood with humans, monsters/demons aka the darkness inside, talking cats being an ancient and powerful race, political intrigue, characters looking for info about their dead mothers.  All of this shit is totally my jam.  But…I had to call it quits in the midst of the second volume.  I think it has to do with the main character Maika, yet I can’t quite explain that either.  Like…most of the things I listed above are paradigms in Final Fantasy VII and I’m not overly fond of Cloud either, but FFVII is my favorite thing in the whole damn universe, so I can’t explain it.  It could be because nothing endeared me to Maika and none of the other MCs had a strong enough presence in the novel.  I was quite fond of the little fox and the multi-tailed cat, but the focus was almost entirely on the Halfwolf.  I feel like this is entirely a preference case, as the series is critically acclaimed and well loved.  If they ever make an animated series out of it or something like that, I’d absolutely watch it.