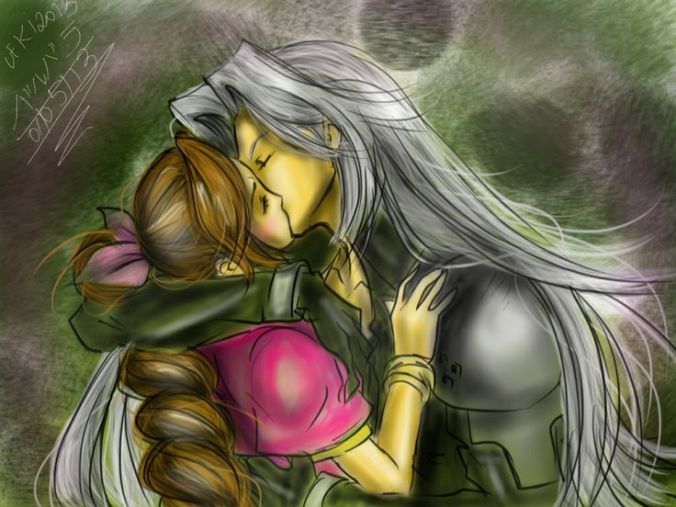 Sephiroth And Aerith (Kiss) by uekiOdiny

This chapter is so much longer than I want it to be.  It’s like 40 Word pages, and I really want to at least half it.  There’s only one more after this, so either way we’re nearing the end of this project ♥

I finished editing up to the chapter break, and you’d think just the existence of that would solve the problem I presented in the first paragraph, but it really doesn’t.  The first part is only around five pages, and what happens next immediately follows from what happens before, so it wouldn’t be a good place to close out the chapter for a variety of reasons.  I’m sure I’ll figure it out though 🙂

I’m up to 70 images right now, but I’m still trying to decide the best way to go about things.  Should I gather and filter 5-10 pictures before incorporating them into the slideshow or do one at a time?  I just finished a section that involved the church, so I was able to collect a bunch of images to choose from about that.  I’m sure I’ll figure this out, too :p  I estimate I’ll have over 200 images before this chapter is over.

This is late today because I just got back from Rehoboth Beach in Delaware for my big bro’s 45th birthday.  We “surprised” him with the help of his wife/my SIL to spend a weekend at the beach.  Like “adults” we stayed up way too late both nights playing cards, drinking, and bullshitting lol.  I was cranky TSN on the ride back because I had to get up early and it was too uncomfortable to sleep in the car for the two hour trip home.  I also didn’t have any coffee/caffeine.  The rooms were amazing, though I guess for the price they better be haha.  It was worth it though.  Plus they brought the BEST bundt cake I’ve ever had.  I’m not normally into bundt cake, as I find it too dry, but this was the exact opposite.  I’m so happy I took off tomorrow to recover though (even though of course I’m working remotely).  My entire body hurts because I’m old and broken lol.  Also because I’m a gigantic cat lady, I missed the kitties while we were still on our way there.  Cid missed us so much he pooped on the floor haha.  Oh Cid…he tends to do that when he’s left alone with Garnet because they both terrorize each other, but she’s kind of queen of the litter boxes, and I wish we could solve this issue somehow.

Anyway, I’m going to veg out and watch something that doesn’t require too many brain cells.  I have tomorrow to catch up on what I missed over the weekend (including any comments you all have made that I haven’t answered yet.  I’m not ignoring you I promised!), but I wanted to get this status post out.  I’m also still having some computer problems.  For now I can work around them, but I should really try to fix whatever the hell is causing the 100% disk usage problem.