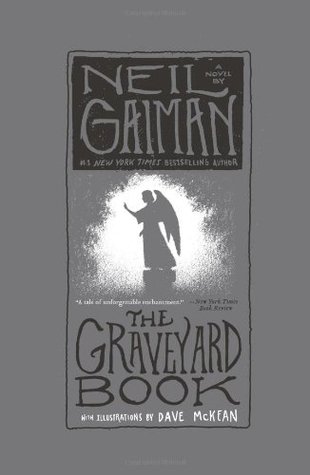 Bod (as he’s called) has a life that’s instantly enchanting.  His entire family was murdered for unknown reasons by a sinister man in black, but through fortune or fate, the killer is unable to finish the job, and the infant is adopted by the deceased Owens’ with the enigmatic figures of Silas and Mrs. Lupsecu as his mentors.  Neither of them are dead per se, but neither do they belong to the world of the living either, and The Jungle Book parallels become even more clear.  Silas is Baloo who served as Mowgli’s teacher and Mrs. Lupescu is Bagheera who taught the boy the Laws of the Jungle.  The Owens’ are Mother and Father Wolf with the rest of the dead serving as the Seeonee wolf pack and other creatures of the jungle.  There’s an incident where Bod is kidnapped by by ghouls who are the stand-ins for the Bandar-log, or “monkey people,” and the later “Danse Macabre” chapter is equivalent to “The Spring Running” story in The Second Jungle Book where all of Mowgli’s friends abandon him for mating season.

“Shere Khan” is of course Jack i.e. “the man in black” who killed Bod’s family and tried to kill Bod, just as the tiger attempted to slay the infant Mowgli, and in a greater Oedipal arrangement, Jack’s action to avoid the prophecy of destruction ends up bringing it about (I have a great rant prepared for what people get wrong about Oedipus Rex in terms of memes and jokes, but I’ll save that for later).

It’s a clever retelling of a classic that I can’t say is any more morbid for involving the dead.  Gaiman is no stranger to fanfiction, and arguing The Graveyard Book counts as one isn’t unreasonable, nor can I say I didn’t shed a few tears before the final page was through.  While not my favorite Gaiman book (The Ocean at the End of the Lane still holds that distinction, and I didn’t miss that the author using the surname “Hempstock” for a witch in the cemetery), it’s a nice tribute to The Jungle Book and a good story in its own right.

You can find more of my book reviews here!

One thought on “The Graveyard Book by Neil Gaiman”