I feel like I’m nearing the end of my set up (maybe?).  I got a bit of everything worked on late last night.  I think I’m worrying too much about certain things becoming problems if I don’t hash them out before I start writing, but I’m literally trying to figure out how to make the best society when I’m living *gestures at everything* lol.  I need to finish up language notes and information on minor characters then I believe I can switch my efforts to the first chapter outline, and maybe even write it.

I forgot (ha!) to contend with how shitty my memory was for remembering exactly what I did at the beginning of this project, and while I took some notes, I didn’t take all the notes.  So initially I moved Chapter 2 to a separate word document before editing it.  Since editing the full document would be beneficial to the story as a whole, I don’t want to separate things before I do that, so that’s where I am now.

I edit the chapter first then give it its own Word doc.  Afterwards I’ll enlarge the text and put highlighted notes next to anything that needs it, especially dialogue.  I remember hearing a voice actor say that’s what she’d do, and it was so simple yet so clever.  Then I break it up into recording sessions.  I did that with the first chapter, which was only five pages, but I did two sessions that I read the same day lol.  In all honesty though that put a strain on my voice, so I think doing 2-3 pages at a time would be best.  I literally have no idea how voice actors read for eight hours straight.  They must know more tricks and whatnot to keep their voices sounding good.  I didn’t really speak the entire day in order to save my throat, but I also take asthma medicine that effects it quite a bit.  I think honey and lemon tea should become a part of my daily ritual. 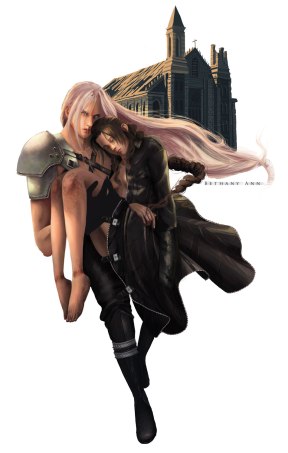 I finished the timing (making sure the space between sounds good) and filtered out the extraneous noises so the recording is a lot clearer.  There are definitely different types of silences.  I was going to re-listen to it last night and figure out the sound effects and music to use, but then I remembered I need to do specific voice effects.  I’d planned this when I decided to do an audio recording of Northern Lights, but I didn’t have to worry about it in that first chapter because Sephiroth doesn’t have any dialogue, but he does in the first chapter of TBR, and I always knew I wanted to do…something with his voice.  Now, you can castigate me for this all you want, but I’ve never actually played Kingdom Hearts myself, but one of my good friends told me he has kind of a “voice of the legion” thing going on, and I do recall that from the clips I’ve seen (I don’t remember if he does in the Remake…), but the problem was it was impossible to find anything when I looked up “voice of the legion.”  I just got stuff about Mass Effect, which I’m not mad about (Mass Effect is awesome.  We stan Mass Effect on this blog and in this house), but it wasn’t what I was looking for, nor was it the Turian “flanging” effect from the same.  It wasn’t quite reverb or echo.  That was part of it, but it was…more, and I finally found it in just browsing Audacity voice affect videos.

I can work with this.  It’s like echo-y, haunted, and eerie, which is going to perfectly juxtapose with the hurt/comfort aspect of the story and yassss I love this shit lol.  The “omg this person is terrifying to those who deserve it and aloof/standoffish in a way to neutral parties but like THE BEST to the person he’s devoted to” and I’m HERE for this lol.

So that’s the next thing I have to do: apply this voice effect to all of the appropriate dialogue.

I’m trying to organize my life *maniacal, desperate laughter* again.  I made my first Patreon post in the year since I’ve had a Patreon (shout out to my sole patron Ace Asunder!) pretty much asking the question “What the hell am I doing?”  It’s tricky because a lot of things I do relate to fanfiction, which I neither have interest nor really can make money off of, but I do spend a fair bit of my own money to do things like audio/video projects, but I’m also using stuff created by other people so yeah, it’s tricky.  I think I need to make a list and gather my thoughts on this whole thing.  I might also make my next post on how much and what I’ve spent money on in order to facilitate transparency.

I’ve also been working on making an author page since I plan to self-publish a short story soon(ish), and I’m also planning on publishing my essays or at least looking into that as an option.  I’m not abandoning this blog, so don’t worry your little heads about that, my  imaginary stans, but I’ll be focusing my attention on things I can legit publish there whereas this blog will be for the stuff you’re used to seeing.  There might be some crossover.  I honestly don’t know what’s going to happen until I do it, but there’s still a bit of organizing I needs to happen.  It’s going to be another WordPress blog, and I think I’m going to pay for the .org option.  I think I’ve figured out what theme I’m going to use (or I’ve narrowed it down to a few), as well as what the site will be called, but there are a few things I still need to hash out.

So yeah, that’s how my 2021 is going so far.  What new and scary projects are you working on?