This was worth the $60 I spent on it and then some.  I have over 200 hours put into the game (similar to WOFF), and while I could do a dollars to hours ratio (it’s $0.30 per hour), that obviously doesn’t encompass my enjoyment, though the fact I spent that long playing should say something.  All of the main characters are so likable, and I love how the side quests help expand their stories and relationships.  The voice acting is also stellar with lots of British VAs getting more play.  Like any Squeenix game, it has its regular motifs and archetypes, and it’s pretty much a rehashing of the very first Final Fantasy.  There are some weird pacing issues with some of the aspects like you can’t open up the A or S levels of the card game until much later in the game, and some of the easier side quests don’t open up until later either.  There are also things you know are going to be plot points way before they become plot points.  It doesn’t take away any enjoyment I don’t think.

I’m now curious about the original Bravely Default and Bravely Second.  I’m hoping there will be a fourth game at some point.

Little bit annoyed with myself for putting this on hold when I had literally less than an hour left of gameplay.  Two days after I finished Bravely Default II, I played this and there was the end.  I…don’t really feel like talking about what this game is about.  I had a feeling and I think I tricked myself into thinking it was something else even when it was pretty obvious, and a YouTube review/analysis confirmed it.  I didn’t watch it because reasons, but the game is very beautiful, and I’ve been pronouncing the name as “GREE” as if it were French. 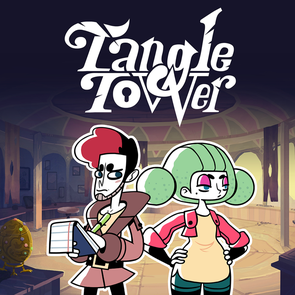 I love when games let you pick up from where the demo leaves off, but I also probably should review what I saw in the demo since it’s been a while.  The voice acting in this game is so good my husband thought I was watching a show, which really shows to go how far games have come because this isn’t even a triple A (I literally don’t even know what the fuck that means lol) title.  It’s a point-and-click murder mystery with a whole host of kooky characters.  So far Poppy is my favorite with her “once pastel and now goth” self.

The premise is Detective Grimoire (who has other games on iOS and Android that I’ll have to check out) and his quirky and sarcastic assistant Sarah are investigating the murder of 19 year old Freya Fellow who die while painting the portrait of her cousin Flora (also) Fellow.  The Fellows and the Pointers share the mansion but live in separate towers.  There’s a whole bunch of family shenanigans and I believe only one member is actually both a Fellow and a Pointer.  I don’t recall whether or not it’s Freya (I need to recheck the family tree), but Fiona or Fifi is the current heir to the “kingdom” as it were, but she doesn’t seem altogether too happy about that.  Fifi, Freya, and Poppy are or were best friends, but Poppy and Fifi seem to have had a falling out, and, of course, Freya is now dead.  I’m really into this and so far it’s been worth the $10 I spent.

I’m just going to listen to the sad piano version of “One Winged Angel” until it squeezes all of the serotonin (and tears) out of my body.  Do you even have songs that you do that with?  Listen to over and over again until you get sick of them?  I usually have a one that I surround with others and I listen to them all in a row over and over again, or I’ll listen to one or two different ones as a sort of auditory palette cleanser then go right back.  What happens then is I have to listen to the “it” song in the same sequence even after I’m out of that mode, because my ear is then trained for that.  Like I have to listen to the theme from “Gravity Falls” right after the theme from “The Mandalorian” because that’s the order they were in on my YouTube playlist.  I’m weird lol.  Also getting obsessed with one song makes me appreciate more music.  It’s like one song will set off a chain event for other songs.  Like I said, I’m weird.

So the hubs sent me a house that’s gorgeous and in our price range.  Our realtor says there are already 80 showings schedule and she can’t get us one for love or money.  It’ll probably be gone in a few days because someone will pay cash for it 😐