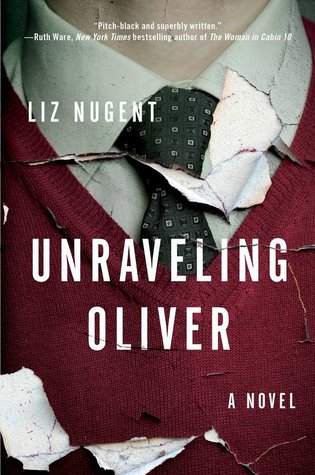 Oliver Ryan, handsome, charismatic, and successful, has long been married to his devoted wife, Alice. Together they write and illustrate award-winning children’s books; their life together one of enviable privilege and ease—until, one evening after a delightful dinner, Oliver delivers a blow to Alice that renders her unconscious, and subsequently beats her into a coma.

In the aftermath of such an unthinkable event, as Alice hovers between life and death, the couple’s friends, neighbours, and acquaintances try to understand what could have driven Oliver to commit such a horrific act. As his story unfolds, layers are peeled away to reveal a life of shame, envy, deception, and masterful manipulation.

A child that is not embraced by the village will burn it down to feel its warmth.

If ever there was a story that exemplified the false dichotomy of “martyrs and monsters,” it would be Liz Nugent’s Unraveling Oliver.  Though I find it far easier to slide Oliver to the “monster” end of the spectrum, I would be disingenuous to deny him the same courtesy I so readily extend to (arguably) more malevolent actors, because another false dichotomy of “nature vs. nurture” still tells us monsters are not really born; they are made.

Each chapter follows a different character’s point of view in a similar vein to A Song of Ice and Fire taking us not only through Oliver’s past and present, but also into the histories of the people around him.  Almost every event in the novel revolves around the question of “what if?”  From Oliver’s marriage to Alice to the tragedies, lies, and misinformation that both ruined and shaped so many lives.

This is one of those stories where where you need to entertain what I like to call “multiple consciousnesses.”  Where you understand why someone is a particular way and you can feel sorry for their circumstances, but you can neither condone nor justify their harmful actions.  Abuse begets abusers, and at the end of the day, this novel is a tragedy that continues a cycle, though, ironically, the final lie is told with the express purpose of ending a cascade of trauma that began so many years ago.

Note: There was a planned full analysis of this story, but I can’t seem to gather my thoughts together in the proper way, and I’m just stagnating on it with an abundance of other reviews waiting in the wings. Eventually, I’ll come back to it, but there are too many other novels I need to review, so for now I’m putting the deeper delving of this on hold.