I’m happy to report I made my NaNoWriMo goal of 10k words and then some.  Setting lower goals or maybe more bite sized really works out for me.  There were some days where I wrote more, a few days where I wrote less, and some where I wrote nothing, but all in all I was able to make my set goal, and I’m really happy about that.  I thought I’d only be working on the first chapter, but 10k is a lot of words for just one, and there was a natural place to end it and start Chapter 2.  I’m absolutely loving the relationship dynamic between Maya and her BFF.  It’s…different but still familiar.  There’s some subversion of the familiar “best friend with a crush” trope that I hope works out.

There is a lot I need to fix before I can continue on.  I know some people can continue drafting and fix everything afterwards (and I’m super jealous of them; I think it’s a plotter vs. pantser thing), but I just can’t leave such a mess behind me.  I build off what I’ve written before, and I just get antsy when I don’t have things established in the text, so I’ve been back to scribbling in Scrivener.  I have more character pages to add there, since I made up at least two and mentioned another I needed to flesh out.

What I’m ecstatic about is I’m establishing the MC’s personality prior to the inciting incident, and that’s what I was missing in my prior starts.  Having her go on a little adventure with her best friend was perfect for not only doing that, but it gave me a vehicle to worldbuild in a much less boring way.  If you’re going to infodump, have it be a conversation between characters as well as how they react to the world around them.

So my plan now is to iron some things out in the background, do a little bit of editing of what I’ve written, and then continue drafting, and what’s amazing is I’m not just looking forward to doing this; I WANT to be working on it right now ♥

I just finished the first audio edit of Chapter 2 where I decide which audio sounds the best.  Next up I have to do the timing and clean up some of the extra sounds in the “silence.”  Timing is sometimes tricky because it might change once I put the sound effects and music in.  I need to figure out when I’m going to teach myself Filmora, too.  If it’s just for visual then that will be after I do all the sound stuff, but I think it could also be used for audio, too.  I’m still in Audacity, so I might just complete the sound stuff there and use the other program for the visuals. 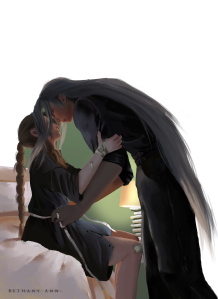 I don’t think I did much work on this again since I’ve been able to make progress on the audio for Northern Lights.  I need to finish adding in the notes on the text before I record, but I also think I was looking at splitting the chapter and figuring out the logistics of that.

I’ve been watching so many shows on the various streaming services I have access to.  I’ve finally gotten to see True Detective, which is phenomenal if you don’t count the second season lol.  It’s one of those things where you know it’s bad, but you still want to see how it pans out so you keep going.  The third season absolutely redeemed it though.  It had the mien of the first and even referenced it so you felt like it was in the same universe whereas the second just seem to come out of left field. I did pick up on some thematic tendrils running between them all though: allowing the abuse and desecration of children leads to the decay of humanity.  You can’t not protect the foundation and future and expect a species to survive.

I was going to mention how I did some work on The Broken Rose at least in terms of the alternatives I’m planning, but I decided things were getting too complicated to work on during NaNo so I sidelined it.  I reached a point in the text where I wanted to explore numerous forks in the road, but I didn’t know a good way to do that efficiently.  I need to figure that part out first before I can continue.  I’m such a servant for logistics lol.

Plans for the author page have been pushed to next year, as well as having my short story edited, though I may do the latter sooner since that’s not nearly as much money, and it would be nice to get that in.

Sigh…I still need to do my Christmas shopping.  Why did I ever sign up for this adulthood shit?  Oh wait, I DIDN’T D: