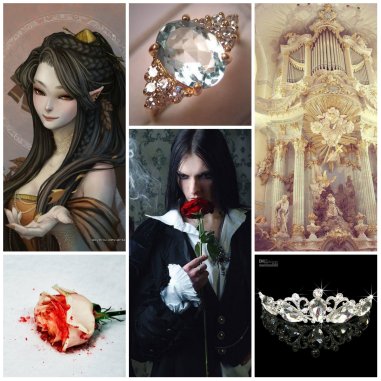 I decided I wanted to use Scrivener only for fully fleshed out ideas, so I removed a lot of things from there to put on OneNote while I figure them out.  OneNote is more for brainstorming/stream-of-consciousness and the step before I put it on Scrivener.

My To-Do and General Issues and Questions pages are ridiculous now, and every time I start brainstorming one thing, I get ideas for another.  It’s…good I guess?  But it’s also annoying because it puts more time in between now and me picking up drafting again.  I’m also getting ideas for the first novel since this one is a sequel of sorts to it.  It definitely follows the events of the first story, but whether or not it’ll be necessary to read (and therefore for me to re-write) that one prior is up to how good of a writer I am…which, uh, yeah idk *awkward laughing*  I might feel better if I make a Scrivener for that story.  It’s on my To-Do list and might help me feel more tethered.  The problem is I literally forget things I’ve come up with (e.g. one of the major religions), which is why I need to have good notes and reminders.

I think I want to update my collage, too, since I have more (accurate) pictures.

Finally got back around to working on this.  I wound up replacing one sound with something else, because I think it fits better with the “sound palette” I’m curating (omfg do you hear yourself???).  The only “problem” is it’s longer than the sound I had before and I’d put other effects after, so it pushed them forward in the timeline.  There’s a way to put audio in without doing this, but I forgot to *shrug*  I’m currently listening back from that point and adjusting the sound effects as I go.  I think I have a better idea about how I’m going to do this thematically.

Of course because nothing remains simple in TSN land, I wound up hearing this amazing, creepy, haunting song in this new show I’m watching Centaurworld.  It’s…interesting to say the least with a shit ton of Mood Whiplash, but the one thing it did get right was the nature of juxtaposition in lullabies.  There have been a few articles discussing why lullabies tend to be murder ballads, and “The Nowhere King” is no different.  The sweet, childlike voices singing horror (not to mention in the show itself, the lullaby is performed by flowers), but what I’m interested in is the whispering beneath.

Cue a frantic searching for how to make a regular voice a whispered one…which you really can’t do.  The only thing I found were tips for how to closely mimic it by turning down the bass, but when you whisper you don’t use your vocal chords (seriously put your hand on your throat while doing so if you don’t believe me; no vibration), but talking quietly makes them vibrate just not as much.  So if I want to do what I’m thinking, I’d have to read the dialogue in whisper and then layer it beneath.  I mean I could, but I don’t want this effect in all of Sephiroth’s speech, but I think it might be good in some instances.  At the very least I want to test it out just to see how it sounds.  I could also listen to the last line in the first chapter of The Broken Rose’s audio, because I made the echoes more dramatic and sibilant.  I…just have to remember how TF I did that.  I hope I left notes about it somewhere…

I’m trying to decide if I’m going to go through the rest of the essays in the same way.  I was initially only planning on doing the Song of VII’s ones, but I might as well do the rest.  I have some one off comparatives that might end up getting combined in some way I haven’t figured out yet, and I also have multi-comparatives like time loops and horror tropes in non-horror stories.  It just makes sense to organize these like I’ve done the FFVII/ASOIAF essay ones.

My next steps are to figure out how to combine my Research and Essay notebooks on OneNote because they’re currently separate, which makes no sense since the research is for the essays.  I’ve also been working on which books will be good for multiple essays, and I got an Amazon GC for my birthday, which I intend to spend (the remaining) on more research/reference materials.  I just need to figure out which ones.

I discovered Microsoft’s To Do List and have started using that for my daily tasks.  I spent a few works hashing them out on Excel based on how difficult and important they were.  I’m still using my old to-do app because I haven’t moved everything over, but I’m hoping to switched entirely to Microsoft because it syncs between the computer and phone, which is fantastic.  It’s one of the reasons I love OneNote so much.  Scrivener apparently can do this, but I’ve had issues figuring that out.  It’s supposed to be easy with Dropbox, but I’m still having trouble.  Another reason I just want to put refined ideas on Scrivener and leave the mess on OneNote lol.