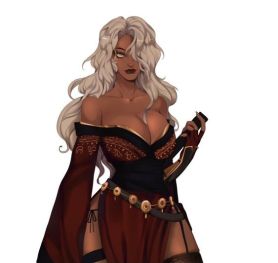 Image is just one of the many I have for character ideas.  I love Pinterest as someone who uses artwork for inspiration, but I hate it for the sake of visual artists.  It’s almost entirely made up of stolen art and even if you do find the source, you can’t leave links in the comments.  I have seen more people being called out for it though.  With all visual artists are going through now with this AI generated art bullshit, I don’t blame them for mass exodus from sites like DeviantArt, which forces you to opt out of having your work used for such, and you don’t even know if that makes any difference.

Anyway, the lady above is either an Eve, sort of the equivalent of the fae but not quite(?).  They mostly live in a forest that’s the border between two worlds/dimensions.  Or she’s from Ave-Bray (AH-vuh BRAY), a kingdom full of queens (take that however you’d like lol).

I’m still working on the surname thing, but I’ve moved on to how they’d work across groups or clades, as I’m calling them now.  The TSN who loves problem solving is in love with this, but the TSN that really wants to move on and eventually get back to writing is chomping at the bit.  I do know that each day brings me closer to that, which is what I tell myself.

I picked the essay I’m going to focus on.  It has a working title about Venusian symbolism, which may or may not change (I like the way “Venusian symbolism” sounds though lol), but to get more detailed it’s focus is how sky phenomena reflect or predict things happening on earth in certain stories.  The “as above, so below” idea found in alchemy.  So there’s a lot I have to work with even in this “one” essay.  it’s actually helping me focus because now I’m thinking about what general resources I want to use, which will help in other projects, too.  I still have a lot more research to do, but at least my focus is more directed.

I promised some exciting news last time, and since I haven’t posted it on any other State posts I’ll do it here.  We bought a house!  Settlement date is 12/16/22 so in about half a month.  I’m not excited, per se, because I don’t really roll like that, plus there’s a lot that needs done, and I’ve really been struggling to, well, wake up at a decent time on the weekends to do anything.  I’ve been trying to clean out my closet (as Eminem would want) for the past month.  I only got some of the crap in front of it cleared away.  I still need to organize the hanging clothes, separate what still fits from what doesn’t, and figure out what I still want to keep from the latter group.  Then there’s the closet floor and after that  have another doom pile of clothes in the other corner in addition to the my dresser and all the shit on that lol.  Though now that we have boxes I could do a combination clean and pack.  I’m going to try to do some stuff during the week after work.  The good thing is even though we’re settling mid-December, we’re not planning to move out completely until the end of January, so we’ll have a month and a half.  Our first mortgage payment will be February 1 and I’m not paying both mortgage and rent lol.  So yeah, that’s my big news.  I’m sure I’ll have more to say/complain about, so if you don’t see some updates or late ones you’ll know why :p