Note: Source for banner artwork can be found at this site discussing other potential media adaptations of the game. 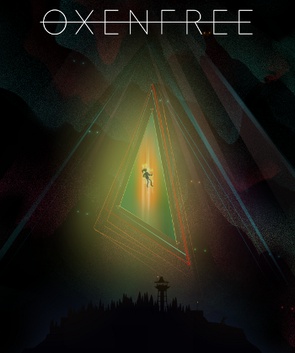 A supernatural thriller about a group of friends who unwittingly open a ghostly rift.

With a heavy Stranger Things vibe and a female MC who’s a person of color, I couldn’t help but be drawn into this paranormal tale that starts out (like most) normally enough with a group of teenagers participating in a high school rite of passage that turns into a supernatural mystery involving secret subs, a lost crew, and a government cover up not dissimilar to The Philadelphia Experiment and Montauk.

Oxenfree, developed by Night School Studio and the brainchild of former Telltale and Disney employees, was released on January 16, 2016 accompanied by developmental documentaries and an alternative reality game (ARG), which allows players to interact with it in the real world, lending a creepier air to an already eerie narrative.   The atmospheric music, composed by scntfc, adds the perfect accompaniment to Alex and company’s exploration of the abandoned Edwards Island.  Along with the music, Morse code serves an integral part to understanding what happened here, though, as usual, the internet provides for those of us not savvy enough to be knowledgeable.

END_OF_DOCUMENT_TOKEN_TO_BE_REPLACED

*Potential spoilers for everything involved with the topic character and their game.

Thanks to LightningEllen for making this character suggestion on Final Fantasy Friday: Light Motifs!

Major Arcana: The Chariot – Squall is a character many of his classmates and teachers find difficult to understand, and The Chariot card is one of the more difficult ones to interpret.  It indicates a unity of opposites, though with an emphasis on such a paradigm helping you get what you want.  It also implies war, struggle, and ultimately a hard won victory over one’s enemies, and this fits Squall to a tee.  He has this cold and aloof exterior, but like the adage says, “Still waters run deep.”  His personal symbol is the lion and of course his last name “Leonhart” invokes the idea of being lionhearted i.e. courageous and strong.  It seems anathema that he has a fiery and more sun associated symbol due to his cool exterior, but this of course feeds into the unity of opposites motif.

END_OF_DOCUMENT_TOKEN_TO_BE_REPLACED

Today is the 20th anniversary of Final Fantasy VII’s North American release.  As with prior years, I always attempt to post something to commemorate the occasion, and I was fortunate enough to have this essay half completed (also fittingly as you’ll soon see).  Despite being on vacation this week and the next, it was still a challenge to finish, and I nearly had to find an alternative to post, but my stubbornness prevailed, and I am able to celebrate my favorite story of all time’s release on the day it happened with writing, the method I love the most.

A Greek tragedy depicts the downfall of a basically good person through some fatal error or misjudgment, producing suffering and insight on the part of the protagonist and arousing pity and fear on the part of the audience.  A true or full tragedy should evoke such, as they are natural human responses to the spectacle of suffering and pain, which causes relief at the end through catharsis as the spectators are purged of these feelings.  There is a release in witnessing painful pageantry and its subsequent resolution, but when tragedy is halved, leaving all of the sorrow and none of the purge, the tale lingers without this necessary release.

The story of Final Fantasy VII has endured for two decades where countless other games are antiquity’s lost.  It is frequently discussed and forever argued.  There are neither clear cut answers to many of the questions the narrative asks, nor a satisfying release to the tragedy it presents.  Lifting one side of the scale high in the air without the resolution of catharsis to balance.  Like an unresolved seventh in music, the tragedy of the story lingers in respect to Sephiroth.

END_OF_DOCUMENT_TOKEN_TO_BE_REPLACED

Major Arcana: Temperance – Cecil (whom I’ve written a full character analysis on before) is the perfect balance of two distinct worlds..  This revelation is foreshadowed in how he manages to reconcile his dark side and become a paladin even before he discovers the full truth of his origins.

Zodiac: Virgo with a Libra moon – Virgos are typically analytical, hardworking, kind, and practical.  They worry often, are shy, and don’t like being the center of attention.  They’re also modest, faithful, quiet, and persuasive with a good sense of reasoning and memory.

This sign seems to be the perfect fit for Cecil.  The eventual paladin is described as a quiet, young man of unsurpassed skill with the dark blade.  He never comes off as a braggart or someone who desires attention just for attention’s sake.  The opening FMV shows him in contemplation with Rosa, and we know from the game’s story that the Dark Knight feels unworthy of the White Mage’s love and worries he’ll never live up to what he thinks she deserves.  However, he’s utterly devoted to her, nor does he ever give up on Kain even when the dragoon knight turns against his best friend.  Cecil does break faith with the king of Baron, but only because he refuses to kill a child (Rydia of Mist) after (inadvertently) burning down her village and slaying her mother as the king’s pawn.  His reasoning remains sound to the point of overriding orders he finds morally repugnant.

The Libra moon adds another layer of rationality.  They tend to be peacemakers, and Cecil is literally the synthesis and the balance of two planets.  He’s the light side of the moon who remains steadfast even in the face of earth shattering revelations that could easily cause an existential crisis.

Alignment: Lawful Good – Up until the events of the game, particularly his mission to Mist, Cecil had no major issues following this path, though we do see him questioning the king on the opening flight back to Baron.  When his orders unequivocally demanded he kill a child, Cecil withstood the inner conflict to go against such an abhorrent act.

Myers-Briggs Personality Type: ISFJ (Introversion-Sensing-Feeling-Judging) – Cecil is definitely an introvert.  Final Fantasy has the distinctive trend of main characters that fit this trait, which is pretty awesome.  Since he’s captain of the Red Wing fleet, sensing seems more practical than intuition, and at one point he plans to go after the seven Crystals already stolen, while Golbez searches for the one he doesn’t yet have, a wholly sensible plan.

I went back and forth between F and T, but settled on the former, since Cecil’s first major decision was based on a personal value, the belief that killing children is wrong no matter what you’re ordered to do (take that “I was just following orders”).  He also adds the destruction of Mist and the death of Rydia’s mother to his growing cache of guilt.  His inability to give up on Kain showcases the trait of looking for the best in people, and he values forgiveness not only for his troubled adopted brother, but also seeks it himself.

Cecil isn’t wishy-washy, and being a captain/soldier, he’d have a sense of rules and deadlines with plans in place.  After Kain returns to his rightful self, the paladin forgives him immediately with no grudge left to hold.  This led me to pick judging for the final piece.

ISFJ is considered The Defender, which solidifies my decision to affix this personality type to Cecil .  People like this rarely sit idle while a worthy cause remains unfinished.  They don’t feel comfortable in the spotlight, but they’ll endure it to ensure what needs to be done is done.

Diagnosis: Cecil is pretty level headed, but it’s possible he’s dealing with some depression at the beginning of the game when he’s still a Dark Knight.  There are also some self-esteem issues, too, since he believes he doesn’t deserve Rosa, a White Mage, for this very same reason even though she obviously loves him.  He’s been forced to fit himself into the wrong role by his adopted father and king, and it’s causing a major identity crisis.  He’s not sure what he’s supposed to be, but he knows it’s not supposed to be that.  The majority of this is alleviated when he becomes a paladin and literally defeats his darker self.  However the identity crisis gains a new facet due the mirror’s light at the top of Mt. Ordeals calling him “son.”

Despite all of this, Cecil is still probably one of the most balanced characters and/or balanced main characters in Final Fantasy.  This could be due to the fact that he has an existential crisis to deal with from the get-go, so when the more prominent one occurs much later in the game, he’s better prepared.  His identity didn’t so much change from Dark Knight to Paladin as be revealed for the latter after the forced and false one was literally slain.

What do you think of my assessments of this character?  Do you agree?  Disagree?  Would you pick another Major Arcana, astrological sign, alignment, MBTI, and/or diagnosis?  Let’s discuss in the comments and let me know whom you want me to do next!